The latest planning exhibition last week featured plans for the TGI Friday/Mothercare/Aldi/Range units on Vastern Road – technically Reading Station Shopping Park, as absolutely nobody calls it. We could be looking at upwards of 900 apartments, although plans are fairly vague at this stage, and if office space is included at the eastern end (as shown) and/or a hotel at the western end then that number could reduce considerably. With an imminent planning application only at the outline stage, further stages could see the plans refined within the broad layout and building heights being proposed now.

This is actually the second presentation of the proposals following a public consultation on the first. The presentation boards include an analysis of the feedback from that initial viewing, with the most interesting aspect of those results being the geographical spread of respondents, located disproportionately north of the river and not especially near the site.

Feedback has centred around the potential loss of the specific retailers, particularly Aldi. Berkshire Live describes shoppers as “reeling” from the news. Oh Caversham – look how far you’ve come! Leaving your choice of supermarket behind for one moment, and assuming jobs can be retained at alternative locations, I’d be in favour of losing bulk single-storey shed retail from this site so close to the station. Shoppers here are predominantly driving, clogging up the centre of town with congestion and pollution, and unlikely to be contributing to the wider town centre economy. Clothing retailers, especially Mothercare and, at a similar location Matalan, could draw custom into town where other shops and food/drink establishments could mutually benefit from extra trade. Aldi is said to be looking for eight more stores in Berkshire, so RG4 might well get a replacement at another location.

However, whilst accepting a redevelopment here could be beneficial, that doesn’t mean this scheme is the answer either. A residential-led scheme of course does contribute to the housing need, and is an environmentally responsible approach. Yet, I would rather precious highly accessible development land around the station be used to provide reasons to visit Reading, rather than using our improving rail connections to attract yet more commuters heading away to London every day. I proposed some other ideas when I previously covered the similar plans at the adjacent ex-sorting office site so I’ll not repeat.

The landmark office building – the only potentially architecturally interesting element of the plans – has been pointlessly shrunk by a couple of storeys to placate the moaners from Caversham Heights, who I suppose could conceivably catch a glimpse of it from the attic Velux. Then mid-rise apartment buildings dominate, shown indicatively as red brick boxes, with a handful of extra floors transitioning to that grey cladding they use on modern ugly towers where they want to disguise their existence against our overcast skies rather than design something attractive.

More positively, a pedestrian avenue (branded a linear park) will be carved through the middle of The Range, hopefully providing an attractive route out to the Thames (when combined with the SSE site redevelopment- see below). Vehicle access is provided on a further alignment, this time cut through the centre of the current plot occupied by Aldi. It’s unclear whether the public art contribution could be a commemorative sculpture of a power sprayer or inflatable canoe, but I’ll definitely submit “aisle of dreams” to the street naming committee. 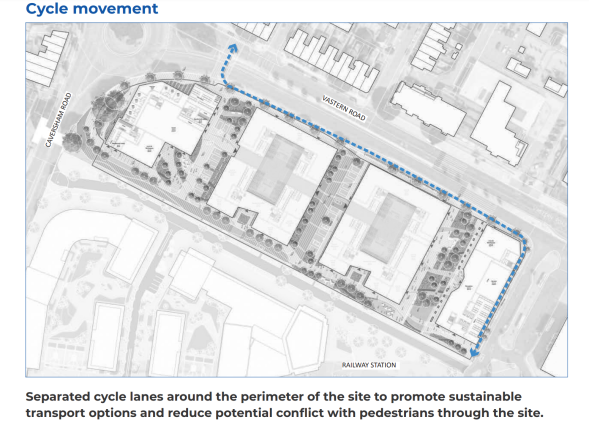 Further positives include a dedicated segregated cycle path created along the full Vastern Road stretch being developed. And a planning technicality preventing ground floor residential forces some greater thought into the street layout to provide a sequence of viable small retail, leisure, and food & drink units fronting the central avenue bounding this scheme from that at the sorting office. The council must now work with both developers to ensure the schemes fit together and create a positive new public space. 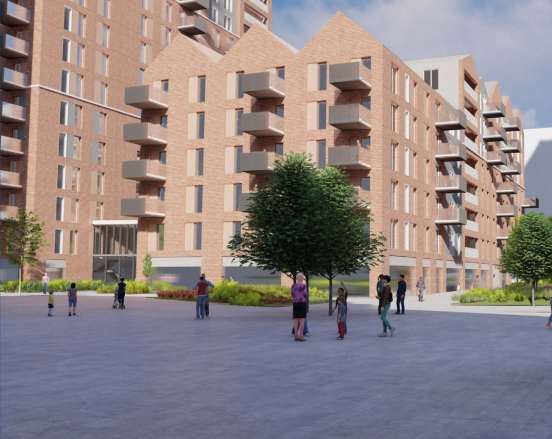 We definitely need some further work on this scheme so make sure you share your views. The developer Aviva is welcoming feedback on its latest plans by Friday 8th November.

Catching up on progress over the road at the SSE site, and illustrating the value of responding to these consultations, we are seeing Berkeley gradually improving their plans. Gone are the weird pedestrian tunnels through the apartment blocks, replaced with clearer spacing. The styles have become more attractive and varied, and different zones have their own theme. I fear they might be synthesising slightly more industrial history than the site can reasonably claim with the apparent installation of a disused rail siding for artistic effect, but maybe it can work. Most positively, the riverside café, added following our collective feedback has evolved to having its own pavilion-style building and raised terrace in the prime spot within the site. Latest images from the developer’s site included below. 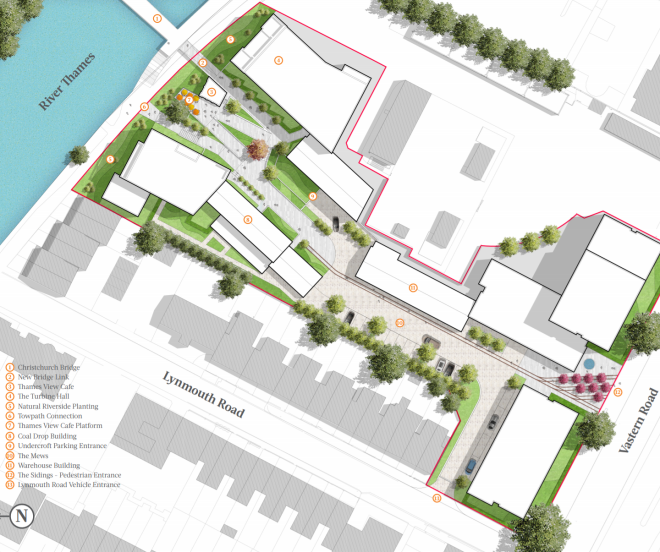 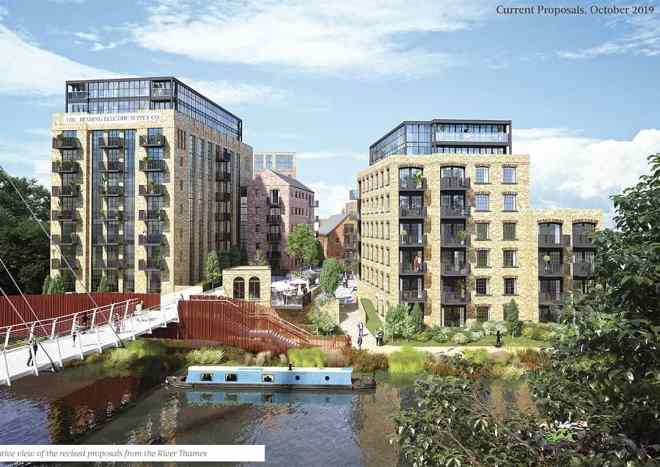 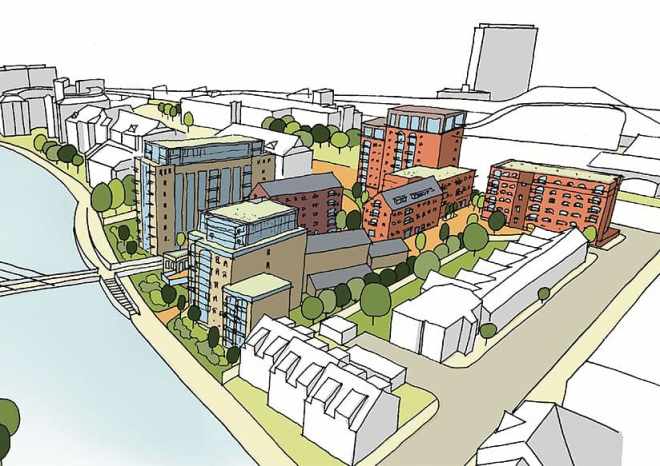