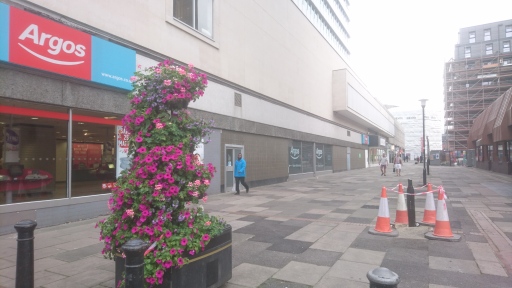 Whether it be for Queens, Kings or Friars, it seems Reading isn’t very good at “Walks”.  This simple suffix seems sufficient to ensure failure – in Reading it’s a jinx.  Here I review their recent tribulations and take a look at plans and possibilities to get them walking tall.

Last month Argos announced it was to become the latest retailer to walk the plank by quitting its store at the Queen’s Walk end of Broad St Mall in the new year.  Queen’s Walk is already something of a walk of shame for Reading.  Despite the admirable attempts at distracting our attention with a flamboyant floral effort, my recent photo above captures the typical and struggling scene – desolate, blank frontages, a hotchpotch of paving, and a comical cordon of cones encircling a sawn-off street lamp.

But improvements are afoot.  The recent photo above (from the Old Reading Facebook group) shows progress on the refurbishment and extension of the old Yell offices into 284 student flats.  It also shows the demolition of the Civic Centre at the end of Queen’s Walk.  Details as to what comes next here are sketchy.  The short term plan is for a walk in the “pocket park” whilst a larger regeneration site is assembled, to include the police station plot.  The snippet below is all I can find in terms of subsequent plans.

Yes, yet more flats.  Although a dedicated space for the market gives some optimism that this could become a bustling corner of the town centre.  The civic development should inspire the Broad St Mall’s owners to step up with something for its frontages.  There’s no reason the Argos unit couldn’t be remodelled to include multiple retail units with entrances on Queen’s Walk.  It also contains a large first floor area, formerly the warehouse.  Here, perhaps, at last could be the bowling alley we’re lacking?

Friar’s Walk shopping centre closed in 2004, having struggled on since C&A went bust in 2000.  Without the C&A anchor unit in use it was always something of a dead man walking.  An early 2000’s plan for a nightclub was harshly rejected on security grounds.  Had that gone ahead, the centre could perhaps have re-invented itself, rather than falling derelict.  In fairness, it’s still in some sort of use.  If you fancy a walk on the wild side this Hallowe’en, you can take on the walking dead at a Zombie Apocalypse experience.  But when your third largest shopping centre is entirely dedicated to hosting any kind of event involving the word “apocalypse”, I think we can reasonably say that it’s a failed destination.

The new plans for the site, shown above, involve demolition and opening it up as a outdoor street with shops and flats above, connecting Friar Street into the heart of the Station Hill development (of which it’s a part), and to the railway station.  This is clearly a sensible plan – we (quite evidently) can’t support a third indoor shopping mall (I’ve even argued that an outdoor street configuration would be much more appropriate on the Broad St Mall site too).  The english climate might not be tropical, but this isn’t Canada – the percentage of time you need to shelter from heavy rain or extreme cold is incredibly low, even if our future shoppers won’t exactly be always walking on sunshine.

I understand the original Station Hill plan was to build the offices first, and Friar’s Walk second.  But with demand for housing currently greater than that for offices, they must be considering reversing the sequence.  The problem for the developers here is that they need to chop off the end of Garrard St car park and re-clad it in order to complete the route to the station and make it a pleasant enough route to establish itself.  Whilst that will be expensive, I think they need to crack on and do that first to get things moving.  Whether the new street retains the name “Friar’s Walk” is highly doubtful, probably not because of my ‘curse of the walk’ theory, but more down the presence of an identically named shopping centre in Newport posing a risk of confusion, or at least domain name contention.

They say “You’ll Never Walk Alone”…except if you’re in King’s Walk, in which case you’re almost certainly walking alone.  I can’t find the history of this short arcade, but I know it’s always struggled to stay anywhere near fully occupied.  As with Pepe Sale in Queen’s Walk, an Italian restaurant in Dolce Vita provides the only real sustained success.  As a centre, it has to work hard for its footfall, not really being on the way to or from anywhere.

The new plan has a chance.  Restaurant demand in Reading now exceeds what the Oracle riverside can supply.  Just opposite here, the former Simonds Bank is (finally) to be brought back into life as The Botonist.  And nearby Jackson’s Corner is to become three restaurants.  The Oracle has previously explored options for a remodelled entrance around the back of Debenhams, and with the Waterstones’ departure, surely they’ll bring forward some plans to make better use of that end of the complex.  So King’s Walk might find itself in a good spot.  I’d like to see it really differentiate itself.  Why not open up the Holy Brook that runs under the middle of the site?  An indoor water course could be its defining feature, with first floor balconies overlooking a pseudo outdoor square of dining below.  Hopefully they’ll get creative and come up with something.

So a slightly random wander around town, and maybe just an excuse for some lame walking puns (ooh, there’s another).  But a thriving city centre needs variation – we don’t want to be completely dominated by the Oracle.  These three slightly peripheral areas might be walking wounded right now, yet I think they can all succeed and bring vitality to the town – hopefully they can walk my talk.

Follow @readingonthames
Note, comments welcome and can be left without any registration!