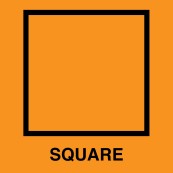 Where is the centre of any town or city?  In my experience, most frequently, people associate with an urban public open space that acts as the main focal point for local civic life.  London, of course, has Trafalgar Square, Nottingham a huge market square, Leeds a millennium square, and the list continues to smaller towns and villages where the identifiable landmark will invariably be a bustling town or market square often flanked by long-established civic or religious buildings.  Even little Newbury, with its novelty-sized imitation of Reading Town Hall, as a large, square market place.  The dictionary concurs:

Interestingly, our fair town of Reading appears to struggle with squares.  Perhaps this prompted our 1960’s fascination with Hexagons – an attempt to set a new trend?  If so, I’m afraid it didn’t catch on – or move the market, if you pardon the pun.  Our historic Market Place is very much a triangle.  But a triangle, you see, simply doesn’t cut it as a square.  And therefore Market Place in Reading, whilst laudably spruced up in recent years, is still somewhat off the beaten track – particularly having no actual market.

So where next?  Well, the Town Hall has a small irregular-shaped area in front of it, which was enlarged by virtue of pedestrianisation in the 1990’s.  At one stage there were plans for a, let’s say louder refurbishment of the area to justify its label as Town Hall Square.  But these proposals were watered down, almost literally, and it’s still really just the back of Marks and Spencer’s rather than the postcard image for the town.

Our search takes us to more recent developments.  We have Forbury Square, a modern office development set around what indisputably qualifies as a square.  However, the scheme never really followed up its square with anything to actually do in it.  The raised grass areas don’t permit any encroachment from outdoor tables from the two restaurants, whilst Forbury Gardens just opposite provides a more relaxing alternative for a sit down and a sandwich in the summer months.  It’s well maintained, but is neither cherished by locals nor likely to be used to host a big screen for the next world cup.

The much-heralded Chatham Place scheme was originally, briefly, known as Chatham Square.  The IDR was to be decked over creating a vast rectangular public space.  Sadly, it didn’t turn out that way.  The IDR remains a screaming pit of despair that annexes west Reading from the town centre proper.  Below is what we were supposed to get; what we got was a car park and some flats.

Perhaps at Station Hill, the flagship development project for Reading, we can eek out a four-sided civic heart?  Well again, we may fall victim to some re-planning (read cost-cutting).  The second iteration of the scheme focused the buildings around a central square-ish area:

This plan has subsequently been superseded with a third, and hopefully final set of plans that retain the current Garrard Street, together with its car park.  There’s still space for a fountain (or very shiny plinth?), but this is really just a street now isn’t it?

Finally, however, there may be hope.  Where Station Hill, Thames Tower, the new Station all come together, with a little pinch of stopping-up orders, land swaps, that all, to be honest, have all become too confusing to follow… maybe here, we might get some kind of square-like concept in front of Reading Station and the Three Guineas.  It’s still split into two areas by a change in level, and flanked by a busy road on one side.  But potentially, if finished off well after these schemes complete, this could be the large public space we’re missing: the default meeting place, a (permanent) event space, the crowds to welcome Reading’s next promotion-winning football team’s open-top bus parade… we can hope.

But even then, as a square I’d argue it wouldn’t quite be there.  However, a little imagination, you could see the Brunel Arcade being sold off for a major development, providing another side to the square.  That could only be done if you could replace the concourse facilities.  And that could be done by building an enlarged station at the lower level, as was originally aspired (and designed) by the council.  Then you’d have your elusive four sides with modern office buildings and ground floor restaurants on two sides, the historic Three Guineas on a third, and a glazed modern station building to a fourth.  There, finally, would be your square.

Where is the Square?

One thought on “Where is the Square?”