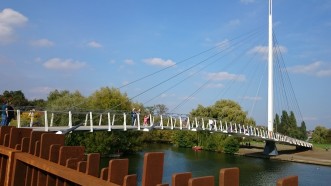 “Pedestrian and Cycle bridge”.  That seems to be the official name for Reading’s new Thames crossing.  Yet despite the lack of foresight when it came to naming the new structure, the council and its planners deserve a little more credit for thinking longer term for Reading’s riverside.

The bridge spans the river just to the east of Fry’s Island.  Towering over the northern bank, a 37-metre mast suspends a wide wooden walkway beneath it.  To the south it crosses the river with comfortable flood-proof clearance, whilst to the north it continues over Christchurch Meadows long after the basic task of connecting the riverbanks is complete.  The southern landing turns 90 degrees to the east to gently descend onto the tow path, bringing the total length to 123m.

Funded from within Reading’s allocation of a government local transport fund, the surprise is not that money was spent tackling cross-Thames congestion.  What astounds is that it was spent, firstly, on a foot (okay, and cycle) bridge; secondly on a bridge just a few hundred yards from an existing bridge; and finally, most surprisingly, that it was spent on a solution that patently far exceeds the minimum to get the job (in so far as there was one) done.

It’s a 21st century civic embellishment that’s more typical of a Victorian era of lavish municipal structures.  In these days of austerity, why did no opportune local politician seek to argue for a less frivolous use of nearly £6m of public money?

Thankfully, no such argument was made, and what we’ve been left with probably joins Forbury’s Maiwand Lion at the top of the list of icons for our town, (shunting Ricky Gervais into third).  Not only that, but just a few weeks before its opening, all became clear with regard to the seemingly arbitrary location for the bridge.  Southern Electric (SSE) announced it was to leave its Vastern Road site for a new-build office on Forbury Road.  The SSE site clearly formed an integral part of the plan all along.  Having walked the bridge, it’s so clear that the natural continuation of the crossing southwards is through the SSE car park, across (or even over) Vastern Road, through the site currently occupied by The Range, and to Reading Station’s new northern entrance.  That will ultimately provide direct access from the station, and town via the underpass, to Christchurch Meadows and Caversham.

With the bridge already in place, visions for the SSE site can be more ambitious.  Expect apartments at either side of a pedestrianised street with ground floor shops and restaurants spilling out into an opened-up riverside square fronting the Thames.  Think the Oracle, but smaller and quieter – less brash.  Recent proposals for Christchurch Meadows, which did fall victim to local hysteria, for a high-ropes course, cafe, and boat hire facilities also make more sense, given the increased footfall brought by a combination of the SSE development and the bridge. So expect to see those kind of proposals back.

The bridge is earning positive reviews, even if usage appears to be settling down after an initial surge of curious locals. The only dissenting voices speak not of the cost but claim it’s not wide enough for cyclists (it is), or that the corner to the southern ramp is dangerous (it isn’t).  But they miss the point.  Taking a few cyclists off the congested road bridges is an aside.  Primarily, this is the first stage of Reading finally exploiting its greatest asset: its position on a world-famous river.  And that’s why all the politicians supported it, or at least didn’t scupper it, when the funding opportunity arose.

Thameside regenerations only come up once every, well, generation.  Reading’s last one was bafflingly wasted with a Tesco Extra on Napier Road (the retailer must be tempted to sell up for apartments, surely?). But the signs, and the new bridge, point towards some bigger thinking this time around.

The council have now launched a residents’ vote to name the bridge; a nice bit of PR but you’ll have to forgive my cynicism for thinking it likely to be an afterthought.  My suggestion would be to recognise the soon-to-be former use of the SSE site, and to reflect the bridge’s piercing high-voltage night time lighting: The Electric Bridge.

Regardless of its name, the bridge is a success. Whilst it’s currently a genuine shortcut for only a few, and a pleasant alternative for a few more, the bridge is worth a visit in its own right.  Night and day it looks superb. But its true value lies in its potential to link the town centre, the riverside, and Caversham in a future Reading with the Thames at its heart. 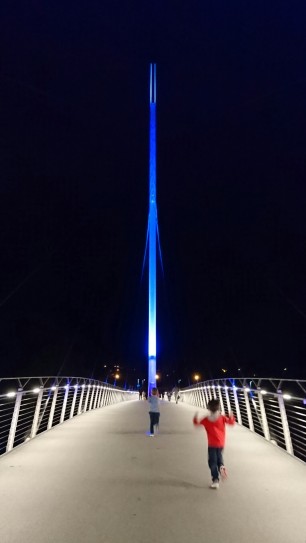 The vanity bridge that’s well worth a look