Between the 2011 census and that of ten years prior, Reading’s average age went down.  The national average, which was three years higher anyway, went up by eight months with Reading’s falling by five.  But if our ages are easily and accurately recorded, I thought it would be worth exploring whether our buildings are achieving eternal youth with similar success.  And that turns out to be slightly more difficult to determine…

Reading has always been a town that’s adapted to the times rather than stood still.  Industries have come and gone: from wool to bricks, to guns, to the 3 B’s of biscuits, bulbs and beer, to insurance, and modern day IT, pharmaceuticals and finance.  It’s a functional town, where stuff gets done without too much fuss.  It’s a town where buildings are either used, or someone tends to come along with a new plan.  Visitors have remarked to me, “it all feels very new”.  And for what is actually a very old town, that is really quite remarkable.  Even back in the sixteenth century, when the Abbey was dissolved the locals plundered the stone and re-used it for new buildings across the town.  And that’s a mindset that to some degree persists to this day – a town of re-invention over preservation.

It’s undoubtedly true that over the years some buildings have been lost that should have been kept.  I’m sure readers might be able to suggest many.  I’m going to call out a couple that have caught my eye on the “Old Reading” Facebook group.  Firstly, from the left-hand image below, the Market Archway where Sainsbury’s now sits on Broad Street.  Secondly, the old Sutton’s frontage that has since been regenerated twice: for Prudential and more recently as Forbury Square opposite the gardens. 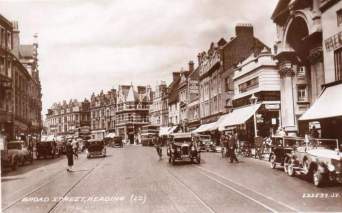 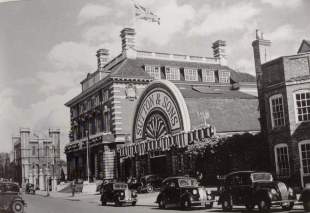 So back to the challenge, is the town being rebuilt quicker than it is aging.  Now, I’m going to refine the question to apply only to the town centre, which I’ll define as within or fronting the IDR.  Clearly without that restriction the town is largely comprised of established residential areas.  I have been able to find some data, but surprisingly little.  The map below shows the proportion of residential stock that is post-war.  My defined area is largely in the 50% – 75% category.  But much of the area isn’t residential, and that’s quite a broad range anyway, so let’s take a different angle.

From a very rough and quick totting up from Google Maps, I reckon there are about 600 buildings or discrete building plots.  I’ve grouped together clusters of small buildings, and divided larger sites, like the Oracle, into vaguely sensible distinct sites.  Let’s say that around 100 of those are “keepers” – old, established buildings that we’d be very well advised, or even legally obliged, to treasure with the simple aim of keeping them looking at their best.  That leaves 500 buildings that are potentially replaceable, for reasons of fashion or function, at something like a typical 50-year interval.

Now, I fully understand that these are broad brushstrokes underpinned by some very rough estimations.  Nevertheless, taking those numbers, around ten buildings per year would need to be replaced, or very substantially structurally refurbished, in order to maintain the average building age, which would implicitly be around 25 years.  I think that sounds reasonable, given that smaller older buildings, like a run of adjoining shops, have been classed as a single site.

That means if ten buildings per year are replaced/renovated then the town centre, as a whole, is not aging.  How would you gauge whether that’s the case?  Well, let’s again assume that maybe half of those building projects would involve visible construction cranes penetrating the skyline, and that a crane might be needed for around six months.  That would mean that, at any one moment in time, if you can see two or three cranes towering over the town centre then you’re in fairly neutral territory in terms of the aging of buildings.

The current tally, would you believe, is indeed three.  All three, The White Building, Thames Tower, and the former Yell HQ, happen to be major refurbishment rather than new buildings, but as I explained above, if the result looks new then that’s creates a new building to all intents and purposes.  There’s also several significant schemes without tower cranes in progress, such as 9 Greyfriars Road, implying my 50/50 split isn’t too far off. 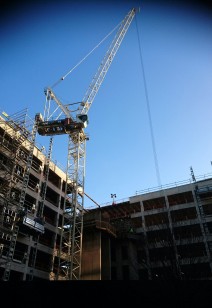 That implies that Reading is indeed keeping itself up-to-date – it’s being recycled.  I think this is a useful lens through which to look at some of today’s choices.  Firstly, Primark wants to close its West Street store and use it for its office headquarters when it takes over the old BHS site.  The council could probably legally reject this on the basis of loss of retail space in the designated prime shopping area.  It strikes me that a more Reading thing to do would be to approve it and take the substantial investment that would see a large atrium punched through the building and existing frontages enhanced.  Meanwhile, the flurry of residential conversions might be worth further scrutiny.  The apartment buildings will be difficult to re-combine into single ownership to renovate in the future, thus slowing our ‘building velocity’ if you like.  So perhaps the council would be well advised to nit-pick and demand the highest quality as these schemes continue to come forward.

In conclusion therefore, usefully or otherwise, Reading town centre appears to be pulling off a similar age-defying stunt to that being performed by its residents.  And given our town’s history of re-invention, that’s perhaps nothing less than we’d expect.

Is Reading getting older or younger?