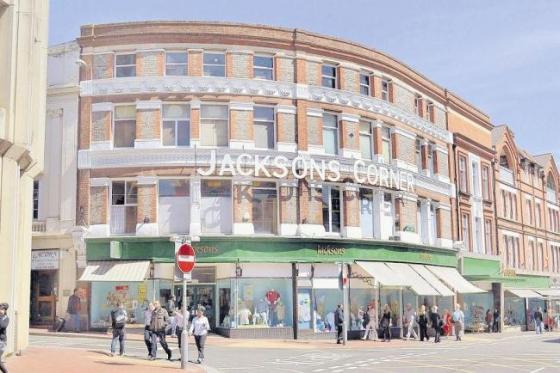 The Kings Road / King Street area of Reading town centre is one of the areas undergoing significant changes.  We’ve got banks becoming restaurants, offices changing colour or becoming homes, shops turning into cafes and bars, a King leaving King Street, and maybe even a local hero coming home.  In this post I take a brief look at the different developments, with a delve back in time thrown in.

Let’s start at Kennet Place (an office refurbishment) mostly because it gives me the chance to show you the aerial shot from their marketing that presents the local geography so clearly.  This is the Prudential site, in the centre of the island formed by the two channels of the Kennet and split down the middle by Kings Road.  The insurer has retrenched to the eastern wing, allowing the owners to renovate and market the town centre end as Kennet Place.  It’s a modern building, but built just before the decree that bricks have no place in office construction.  I think it actually looks better than some of the more contemporary glass houses, and with its pleasant Kennet frontage it will probably fill up quickly.

Across the road, the much-derided Kings Point is no more.  It’s to be replaced by a 16-storey apartment tower.  The developers have launched a website for the building under the name Verto Reading.  Now, I know it must be difficult to come up with names of property developments, but really?  If it was a roller coaster then maybe.  Would “New King’s Point” not have done the trick?  Anyway, the old eyesore with its giant graffiti face has gone and the tower crane is up, so this is definitely going to happen.  There’s a promising ground floor restaurant unit fronting the river included too.

Next door, the Wynford Arms has relaunched as Thirsty Bear to pretty decent reviews.  But one door further down, good old BoB (Back of Beyond) is probably on borrowed time.  Despite plenty of new residents to keep watered, the unremarkable two storey riverside building hardly makes the most of its site.  As development land it must be worth a fortune – far more than a bob or two.  The same goes for the scruffy parade of shops at the other side of the road.  That said, I’m sure Wetherspoon would be keen to take a large space in a new development somewhere within the town, particularly in this area nearest to the student population.

Heading into town, many office blocks on the south side have been converted into flats, or serviced apartments, with varying degrees of effort.  I believe a number of insurers once occupied some of the addresses, but as Reading’s commercial centre of gravity has shifted towards the station, there’s clearly been a surplus here.  It seems only Kings Point as a building reached a point of no return, with ‘mend and make do’ the order of the day elsewhere.  Personally, I feel they look a bit too obviously like old office blocks, and I’d rather see purpose-built flats.  But I am told that sometimes former office buildings offer larger units as developers can’t build them to the precise minimum floorspace that would maximise their profits. 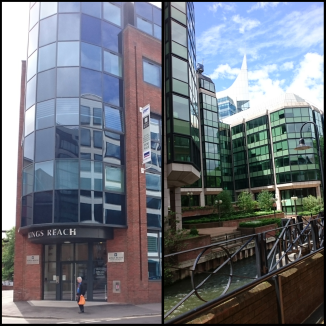 The northern side of the road is retaining its offices, most of which have been refurbished.  Most notably the “brown glass building” has had its unfashionable 70’s-inspired windows replaced and been rebranded as “the white building”.  It would appear they’ve had some success, with their trendy approach attracting a number of lettings to smaller business, although they should have done something with their Holy Brook perimeter.  (“The green building” and “the blue building” live on).

The Burger King on King Street on the entrance to Kings Walk is to be replaced with Pho, which describes itself as Vietnamese street food.  Undoubtedly, street food is the hot trend right now, with many pop-up events proving highly popular, including our own in Reading such as blue collar and eat reading.  But surely you can’t rent a restaurant unit with a professional purpose-built kitchen and still call it street food?  That’s building food, is it not?  Anyway, fast food is out – street food is in, so Burger King, which perhaps risks holding back Kings Walk’s new culinary aspirations, is dethroned.

Burger fans needn’t be too concerned.  If Broad St Mall’s Burger King is too far away then immediately opposite, Honest Burgers will be venturing out of London to take the newer half of the former Simonds/Barclays Bank.  The original part has recently re-opened as The Botanist, finally bringing back into use the 1836 building eight years after Barclays moved out, which is fantastic news.

With Jackson’s Corner also to become three restaurants, including Byron Burger and Busaba, it looks like there’ll be plenty of culinary choice to keep Edible Reading busy.  Edible Kings Road could be a viable restaurant review site in its own right.  Although I’d be wise to avoid conflating King Street with Kings Road.  The former significantly predates the latter.  King Street was originally two parallel narrower streets known as Sun Lane, home to the original Sun Inn, and Back Lane.  The buildings separating the two were swept away in 1760 with the resulting thoroughfare named King Street in the year King George III took the throne.  There was a similar “middle row” at the eastern end of Broad St that survived a further century.  It was occupied by slaughter houses that sent “rivers of blood” down the street.  I’m not sure that a street food event would have been too appetising back then!

When people think of knocking down buildings to create wider roads, the controversial concrete IDR is probably the local example that comes to mind.  But we’d do well to remember that Broad St, King St, as well as Queen Victoria Street – arguably Reading’s three finest streets, all owe their success to the same approach.  Perhaps we could bash a new route through Next (the old Littlewoods) – Queen Elizabeth Street?

Back on topic, in 1891 a statue of George Palmer was sited at the very eastern end of the newly full-width Broad Street, facing towards King Street.  I started a petition for its return, which I explained in a previous post.  Thanks to some good work from James Porter and the Old Reading Facebook group, the petition has accumulated several hundred signatures.  BBC South Today picked it up for their “…and finally” item a couple of weeks ago.  Here’s their piece, which I think is well worth a watch:

You can still sign the petition here.  Returning the statue would give some gravitas to this historic area, and constitute a fitting recognition of Palmer’s achievements and philanthropy to Reading, as originally intended by the towns-folk who funded the monument.  It would stand prominently at the eastern end of Broad Street, particularly so when illuminated at night.  And I’m sure he’d enjoy peering down Kings Road, keeping a watchful eye over this rapidly evolving part of town.

Your comments are very welcome, and can be left below (without registration!).  Facebook users click to view comments first.