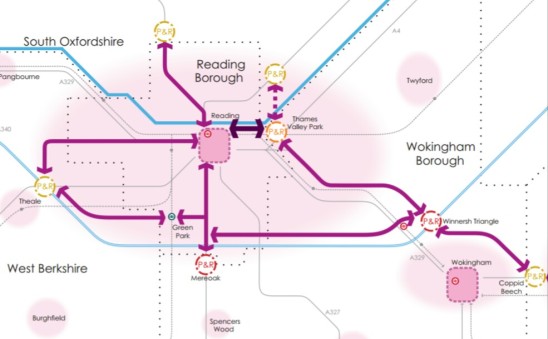 This week I attended a public consultation on the East Reading MRT.  MRT stands for mass rapid transit.  The proposal is for a new link from the big Tesco’s on Napier Road through to Thames Valley Park, including a bridge over the Kennet.  A new park & ride scheme would be based at the eastern end.  The media have picked up some local opposition to the impact to the riverside, but I think they miss a bigger picture.

The junction, or ‘confluence’ in academic terms, between the Thames and the Kennet is Reading’s defining geographical feature.  When Saxon leader Reada paddled up the Thames in the 6th century it was this left turn that led him to find a favourable pitch, probably around St Mary’s, on slightly elevated ground between the Thames and the Kennet.  With the rivers providing water and access to transport goods, the settlement became established.  When the Danes came calling in the 9th century, they built a rampart to combine with the natural defensive boundary of the Thames and Kennet on the other two sides.

So am I suggesting we should keep Kennetmouth as Reada or the Danes might have found it?  Absolutely not, because Reading’s industrial period already changed things forever.  The waterways would have become bustling with activity as the main mode of freight transport.  That is, of course, until Brunel came along and blazed his railway line right over Kennetmouth in 1840 as part of the line from London to Bristol.  The railway revolution also saw another rail bridge across the Kennet added just a few yards further south as part of the Southern railway line from Reading to Guildford.  In 1891 the horseshoe footbridge is added.  There’s also a whirring gas pipeline over the river, and telephone cables.  Be it for defence, transport, energy, communications – the mouth of the Kennet has always made a crucial contribution to the growth and success of Reading.

In my view, it’s quite forward-looking that the private motor car should be omitted from that list of developments and that we skip straight to a bus and cycle link for the next addition to Kennetmouth’s roll call of infrastructure.  I believe the MRT scheme will ultimately evolve into a modern tram line.  In the meantime, it will provide a fast route into town for buses from Thames Valley Park, Winnersh Triangle, Woodley, Wokingham, Bracknell and Heathrow, with around a ten minute reduction in peak journey times.

Sadly, the initial plans include one absurd aberration, which can hopefully be remedied before the designs are finalised.  They plan for the section over the Kennet to be just a single lane, with traffic lights at either side.  I asked whether this was to save money, but I was told that the design was to ensure the bridge could never be converted to be used by cars.  This is brazenly bonkers  reasoning.  Should I not plant a tree in my garden so that I’m not later tempted to break off a stick and poke my eye out?  How about we build a sensible bridge and then just don’t use it for stupid things?

I can only assume this measure is to placate the Greens, who have voiced opposition to this scheme.  The irony is that on the role of the car in the town centre, the Greens have won.  Quite rightly, the days of adding pure road capacity into town are over.  The only new roads we’ll see around here will be to bypass the town centre, short infills to relieve bottlenecks, or to serve new developments out-of-town. (Note, I would count the Third Thames bridge plan as a by-pass for suburban populations in Caversham to by-pass town, and Sonning).  For Reading town centre, I think we’ll ultimately see road capacity for cars, and car parking reduced – that is the direction of travel.  So the chance of re-purposing this new Kennetmouth crossing for private motor cars in their current form is very low – it would be a dumb move that would clog up Vastern Road and slow the already-crawling IDR to a standstill.

Initial plans have around 30 buses an hour in each direction (mostly re-routed existing services), that’s one bus a minute when you count both directions.  With buses arriving at random intervals and a long hold with both sides on red to allow a bus to traverse the crossing, I’d estimate that at least one in four buses will be subject to a short wait at the lights.  With future growth, that will get worse.  And it would hamper any tram upgrade similarly.  Even if we accept these short hold ups, it might turn out that we could use the extra lane for additional cycling capacity, if that really takes off.  Or quicker than we might imagine, we might have self-driving multi-occupancy silent electric-powered pods scuttling back and forth along the route that could be programmed to only use it if they won’t cause delays for buses.  My point is, how incredibly short-sighted to replicate the constraints of Sonning and Cow Lane on this new bridge.  To the council, build us a two-lane bridge, and replicate the success of Christchurch bridge by making it an attractive landmark in its own right.

The Greens have also been opposed to the park and ride element of the overall scheme.  Apart from the clear contradiction of lamenting a solution designed to take cars and fumes out of town, they have also exaggerated the quality of the green space being lost, including tweeting an image of the prettier parkland in Thames Valley Park that is unaffected by the plans.  I tried (and struggled) to access this overgrown area and was only impressed by the sheer diversity of debris strewn around the place, as my photos below show.  It looks to me like the car park will be set well back from the river, it’s shielded by greenery and it makes far better use of this inaccessible and forgotten parcel of land.

The consultation for the MRT is open now on the council website for you to have your say.  For my part, it’s a plan for extra capacity for buses and bikes, and for faster journeys, whilst tipping the balance of power away from the car.  That’s got to be good for the economy and the environment.  And as for Kennetmouth, I think it’s an entirely appropriate next chapter in the rich history of the gateway to Reading.