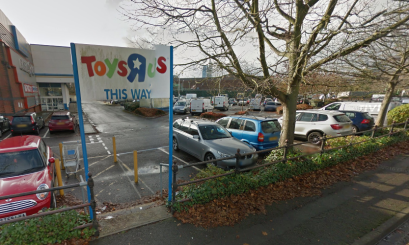 This week a ‘screening opinion’ – a kind of forerunner to a planning application – has been submitted for the closure and redevelopment of Homebase and Toys R Us.  The proposed scheme would see an incredible 800 homes built on the site in blocks of up to 19 storeys.  Read on for some views and my typically optimistic vision as to how this whole area could be improved more substantially.

The long-term future of “bulky goods” retailing does not involve large warehouse units like this in the centre of Reading.  Vast single-storey barns with open-air car parking – it simply cannot justify the land use when it’s so close to the station (and therefore sub one-hour door-to-door travel time to central London).  As land values increase further, there’s no way that these places can sell enough to compete with other land uses.  Perhaps you might see some kind of city centre Click & Collect hubs appear, but I would expect the likes of Toys R Us to set up home out-of-town.   A couple of weeks ago, a similar pre-planning submission was made for 450 flats on the Iceland/Wickes site in Chatham Street.  It seems to me inevitable that the whole of Forbury Retail Park will, at some point, meet a similar fate, as will The Station Retail Park – even Aldi!

Assuming those employed at these places can find suitable other jobs, or relocate with their retailer, I don’t see this trend as a bad thing.  Essentially, the town centre is bulging outwards and taking in these areas.  Supermarkets will be re-provided on the ground floor of larger buildings.  Customers will have to drive out of town to buy their sofas, or order online.

I do fear, however, that we miss the opportunity to create a genuine town centre extension that would draw interest and custom more widely than from just its immediate new residents.  This plot is just across the road from the Prison site, that I, along with many others, still hope can be used for more than just yet more housing.  The latest psycho-bobbins personality test I did at work labelled me a “Dreamy Idealist”, and readers of this blog would expect next nothing less than an ambitious alternative, or at least augmentation, to the proposed plans.  Well, here you are:

After the botched plans for covering the IDR to the West of the town centre, maybe we could do better to the East.  I’d like to see the proposed bus-only link along Napier Road to the A3290 open initially to cars as well.  This will mitigate the impact of me closing Forbury Road for probably two years to dig it up and lower it by five metres or so.  Homebase would have been closed and replaced with a re-routed Kenavon Drive with flats either side.  I’d cover over the lowered Forbury Road to create a new avenue, actually let’s go with boulevard, allowing a tree-lined pedestrian (and cycle) route from the Station, passing Forbury Gardens, to Kenavon Drive and the Prison – now a cultural centre with hotel, museum/gallery and cafes/ restaurants.  A new Oscar Wilde square sits above the present-day roundabout and faces the Prison as well as new developments on the Homebase car park and Forbury Retail Park.  Finally, we could allow traffic back under the covered route, appearing at a signalled junction with the newly routed Kenavon Drive.  The Napier Road to A3290 link would be converted to bus only, or if I had my way, tram.

Now before we write off this vision as far-fetched, let’s just bear in mind that 800 flats could be as much as £250 million’s worth of property.  And Forbury Retail park must be 3 times the size.  You could be looking at well over £1 billion in total.  In fact, I would argue, my boulevard would hike up those values considerably – particularly the flats fronting that route and the square.  Wouldn’t it be great if these developers and land owners could get together and spot the opportunity to be a bit more radical and create something amazing for their new residents and for the rest of us?  Come on guys, or else I’ll be throwing my toys, all 23 piled-high aisles of them, out of the pram.

Throwing the Toys out of the Pram

9 thoughts on “Throwing the Toys out of the Pram”